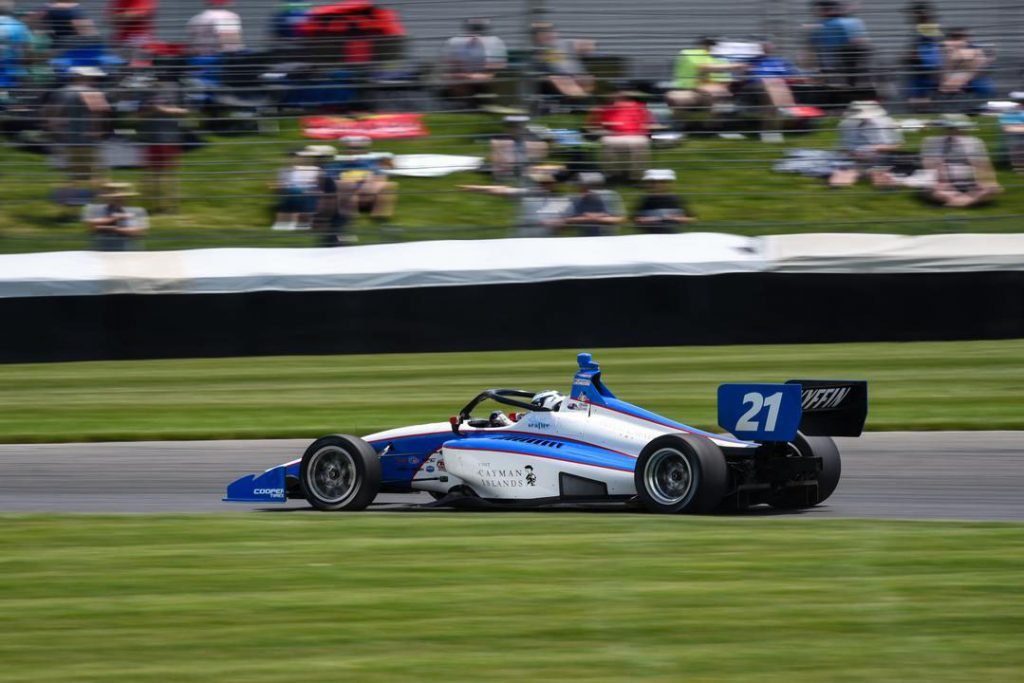 Hot temperatures and rain greeted the drivers on track at the Indianapolis Motor Speedway (IMS) this weekend, among them James Roe and Kyffin Simpson representing TJ Speed in the Indy Lights Presented by Cooper Tires program. Indy Lights drivers and teams had quite the array of track conditions presented during the weekend, including a five-hour stop and hold while conditions changed from warm and sunny to damp and rain on Saturday. 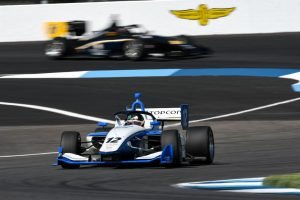 Friday provided hot and sunny weather, with track conditions consistent throughout qualifying and race one. With both TJ Speed cars making a pit stop early on in qualifying, the TJ Speed duo would end their session with results deeper in the field than anticipated. Ready to give it all they had in the first wheel-to-wheel action of the weekend, Simpson and Roe started race one in the sixth and seventh rows respectively as they aimed to move forward. With only two yellow laps throughout the race, there wasn’t much opportunity for bunching up; however, Kyffin Simpson made his way up to eighth by mid-race, but eventually fell back ending his day in 13th, just behind James Roe in 12th.

“It was a tough first race, but we know what we need to do now for race two, so we are expecting a much better result,” explained TJ Speed’s Tim Neff. “We were quick when we tested here back in October so I know our equipment and drivers can be much further up the grid.”

A major storm rolled in from the west on Saturday just as race two was underway and lightning forced the drivers and cars to pit lane. With the race paused on the 13th lap out of 35, series officials moved the second half of the race to the end of the day following the completion of the NTT INDYCAR SERIES event.

Coming back out to very different track conditions as rain soaked the facility, the strategy had to change. The decision to switch to rain tires was made as they headed back out onto the track. Simpson, starting in 13th, was able to make his way into the top-ten finishing the wet race in the eighth position. Roe unfortunately took on contact from behind pushing him into the gravel with thirteen laps to go causing him to drop from eighth to an eventual finish of 13th.

Neff added, “The boys showed great drive and pace in the wet as they both moved forward. Kyffin was well inside the top-ten and James could have earned his career best Indy Lights finish if it wasn’t for late race contact. We will put this weekend behind us and all we can do is focus on doing the same thing in our next race.”

TJ Speed Motorsports has a quick turnaround for next weekend at Road America where they will compete in the Formula Regional Americas’ second round of the year. Indy Lights will be on track next Saturday, June 8th at Belle Isle for the Chevrolet Detroit Grand Prix. You can follow along all weekend on the TJ Speed social media pages on Facebook, Instagram, and Twitter.